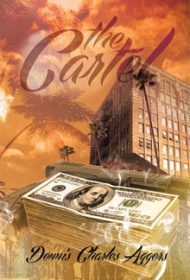 A pair of charismatic cocaine dealers team up against a rival cartel, wreaking havoc and raining down bloodshed from Beverly Hills to San Diego in this ambitious crime story from author Dennis Charles Aggers.

Not to be confused with the bestseller The Cartel by Don Winslow, this epic spans the two months leading up to Christmas. There are no real heroes here, but our leading man is D’angelo L. Jackson, Jr., known to all in his crime syndicate as Debo, husband to Shelly, owner of dog Rex, and upright citizen when he’s not moving massive amounts of coke through L.A. Debo’s boss is Charles Write or “Mad-C,” the take-no-prisoners kingpin of a multimillion-dollar drug empire.

Things go awry when Debo is confronted by two rogue DEA agents who want a healthy slice of Debo’s monthly cut in exchange for protection from DEA investigations. These guys don’t know that Mad-C already has an L.A.P.D. cop on the payroll. Things get worse when Mad-C’s organization attracts the attention of a cartel boss operating out of a tony yacht club in Malibu and his enforcer, a vicious soldier and dangerous foe. Add in a dirty politician who’s been skimming from his own campaign, and you’re one oddball short of an Elmore Leonard novel.

Where the author uses exposition to communicate plot, the book occasionally drags; Aggers’ observational sense is keen, but his narrative voice is dense. The book shines, however, in its rich, complex characters and the underlying threat their choices expose. After a major escalation between the warring factions, Aggers unleashes hell, churning out gunfights, car chases, kidnappings and bombings with abandon.

If the book is Godfather-esque in scope, it’s Scarface in tone: a violent saga painted with the help of the alluring setting of Los Angeles and its environs. While it’s a bit hard to swallow Debo’s inherent nobility in the wake of his behavior, it’s a mild complaint to lodge against a solid urban thriller.