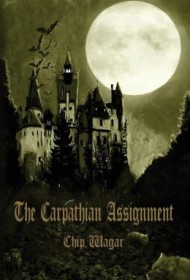 From ‘50s horror flicks to modern ballets, Bram Stoker’s 1897 gothic horror novel Dracula has left an artistic legacy that’s spanned more than a century. That vaunted tradition makes any retelling of the tale difficult to pull off, but Chip Wagar manages to add new dimension to the story of Count Dracula in The Carpathian Assignment.

Launching his story in the epistolary style of Stoker, Wagar presents a letter from the grandson of Kalvary Istvan. The letter explains that Istvan came to Transylvania as a 56-year-old widower and veteran in the spring of 1896, assigned to the post of chief of police by the royal court in Budapest. There, Istvan witnessed events that would form the basis of Stoker’s famous account.

From there, Wagar shifts into third-person, detailing Istvan’s arrival in the Bistritz district of Transylvania and his detective work on a string of unsolved homicides. With the aid of an investigator from the Royal Hungarian Gendarmerie, Istvan uncovers a supernatural predator, a monster rumored to haunt a castle high in the Carpathian Mountains.

The premise is straightforward in its basic spirit and structure. It’s the care and detail Wagar brings to the story that makes the retelling feel so fresh and vibrant. Armed with an encyclopedic background on the intricate history of the region, Wagar gives his text a depth and historicity that’s difficult to find in Stoker’s original novel. (Indeed, Wagar’s level of detail may deter some casual readers.)

A lawyer by trade, Wagar displays his dedication to the painstaking detail underpinning the original Dracula mythos. Thanks to that narrative acumen, he manages to coax new insights from an old story, delivering a tale that will please even the most dedicated fans of the original.