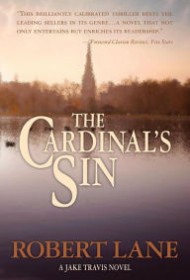 In this engaging thriller, a former special ops agent wrestles with his conscience when he unsuspectingly kills the wrong man — a Catholic cardinal — on a mission.

Jake Travis, a contract agent, is vacationing in England with his girlfriend Kathleen when he’s asked to kill a chameleon-like paid assassin, Alexander Paretsky. Paretsky’s movements have been traced to a park, where he has begun taking early morning walks dressed as a cardinal. When Jake confronts him, the cardinal says, “Forgive me my sin,” holding out a piece of paper — a faded photograph — in his hand. Perplexed by this exchange, Jake completes his mission anyway. When the victim turns out to be a well-loved cardinal instead of Paretsky, Jake must find the real Paretsky, uncover the reasons that the cardinal willingly took Paretsky’s place in the park, and grapple with the consequences of killing a man of the cloth.

That may seem like a lot of ground to cover — and there are times when author Robert Lane should have narrowed down his plot — but the mystery is credible, with some literary references and discussion of the progressive changes in the Catholic Church to add heft. Jake is the typical wise-cracking special agent type, with some amusing lines:  “The people I work for like that word. Erase. It’s simple. Effective. On a good day, they can spell it….”

For all that, though, Jake seems like a throwback to another time – more gumshoe than special agent; more low-tech than modern, gee-whiz gadgetry – spouting the kind of lines about women that might have come straight from a detective in an earlier era, as in:  “Leave it to a woman to scatter your buddies like a gas blower on dry fallen leaves.”

Nonetheless, fans of this genre will find a compelling, quick-read novel — and Jake’s moral struggles, particularly at book’s end, are sure to provoke more thought than your average thriller on bookshelves today.