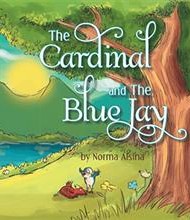 Norma Alsina’s debut picture book attempts to examine racism in the story of a blue jay and a cardinal who has been raised to believe that blue jays are inferior.

One day, Mr. Blue Jay—who is a baby—notices an injured cardinal, and is determined to help. He tells his mother, who takes the bird into her own nest. Meanwhile, a distraught Mrs. Cardinal is looking for her lost child and enlists the other forest animals in the search.

When she learns that her baby is being cared for by a blue jay, she is shocked, exclaiming that she told her children not to befriend the blue jays because they are “so different.”  She is scolded (presumably by Mama Blue Jay, although it isn’t clear in the text) for her decision to “teach your little ones things that you really don’t know about,” and the little birds play together.

The Cardinal and the Blue Jay appears promising, as the cover is bright and the entire book warmly illustrated. However, the story itself is awkward. At first, the real issue seems to be the problem of physically relocating the injured cardinal. Then Mrs. Cardinal’s plight dominates the narrative, followed by the revelation that she judges the blue jays for being different. At times, it is unclear if the lesson is in parenting or acceptance, and the moral that the birds are more alike than different tends to get lost in the flurry of the missing cardinal.

Additionally, the writing often lacks basic grammatical necessities, such as quotation marks and capital letters following periods, and the text is inconsistent. For example, the baby cardinal is referred to as “he” initially and then as “Miss Red Cardinal” throughout the rest of the book.

Alsina clearly is well intentioned. But the issues mentioned get in the way of her attempt at both a moral and entertaining story, leaving readers less enlightened than the author might have hoped.