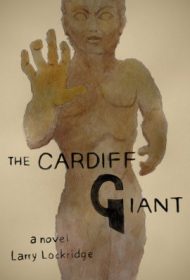 In this farcical tale, an investigative journalist goes to Cooperstown, NY, to report on a missing icon, only to discover that it’s not the town’s only oddity.

Jack Thrasher has been sent to investigate the disappearance of the Cardiff Giant. The giant was originally dug up in Cardiff, NY, in 1869. At 10’5,” with a 6-inch nose and 37-inch neck, the giant weighs in at 2,995 pounds—pure gypsum. Now it has disappeared.

In Cooperstown, Jack meets Thor Ohnstad, owner of the hotel where Jack is staying and head of the local chamber of commerce. Ohnstad introduces him to sheriff and pig farmer Barry Tarbox. After a day touring the town, Jack and Ohnstad take a seat at the grill and are joined by Esther Federman, a psychologist seeking her roots in a nearby defunct Jewish resort town. The two strike up a friendship and Federman takes Jack in search of an ancient Jewish text, while schooling him in Jewish mystical traditions.

Soon, he’s meeting with everyone from Federman’s half-sister, a set designer and believer in “new age notions”; to an opera singer who refuses to perform until the planets are properly aligned; to Tabby and Harris, co-hosts of The Morning Show. His various quests are set against a backdrop of baseball, theater, Native American culture, tango, West Nile virus, and more. There’s also the appearance of a piece of Holy Ravioli bearing the likeness of Mel Gibson.

This is a rollicking, multi-faceted tale that never lets up. Despite its humor, the story is packed with information on myriad subjects. The conversation is quick, witty and often snarky, such as Esther’s catty observation about Tabby: “I thought they fired anchors [of]…a certain age…Those Chiclets hurt my eyes.” Or Tarbox’s comment after rescuing Ohnstad with a net from a suicide attempt: “Bagged him!” he exclaims.

Any reader looking for escape, laughter and information about a bit of everything will surely enjoy this tale.