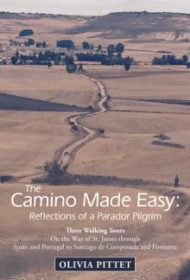 Olivia Pittet’s The Camino Made Easy is a guidebook for those wishing to travel the Way of Saint James (also known as the Camino de Santiago), a journey leading to the shrine of the apostle Saint James in the Santiago de Compostela cathedral in northwestern Spain.

Pittet’s narrative is based on three trips she took, two along the French way (from St. Jean Pied-de-Port) and one on the Portuguese way (from Porto). As readers follow the author on her journeys, they are treated to a wealth of information, from what the various accommodations are like, to the literature, history and mythology associated with notable places on the way.

Thus, readers learn that Charlemagne’s army fought near Roncesvalles (in northern Spain) or that “the [Knights of the] Templar mystique is alive and well along the Camino.” Pittet also carefully points out different architectural styles of the monasteries and cathedrals and draws attention to the old Roman roads and bridges. “The entire landscape is a palimpsest of human history,” she writes.

Pittet eschews some of the harsher ways to travel (like hiking with a heavy pack and sleeping in “dormitory-style” hostels). Instead, she recommends a bus-supported trip with reservations in comfortable hotels or paradors. She writes in a friendly, conversational style, offering personal insights and anecdotes along the way. As is appropriate for a book concerning pilgrimage, Pittet also has a feel for the mystical; for example, she describes the Celts who first followed the Milky Way to Finisterre and muses that the Way of Saint James and Finisterre are both places “where the walls between worlds are more permeable.”

Pittet’s book skimps in some places. At only 19 pages, the Portuguese Way section seems hurried, and occasionally the author omits a sorely needed explanation (“We refilled our water bottles at the Fountain of Youth”).

Nonetheless, there is much to savor here. This book should prove a fascinating read to tourists, pilgrims and armchair travelers alike.