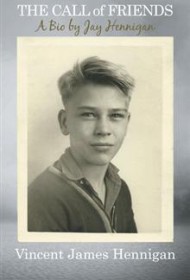 This brief biography describes the author’s childhood growing up in small-town New York, before World War II, concentrating especially on his relationship with his older brother Pat. They share many adventures together, from trying to repair the wall light in their bedroom (ending with Pat jabbing himself in the cheek with a screwdriver), to putting on a mini-circus show for the family, with Pat as strongman and barker and author Jay Hennigan as clown.

Life seems rather charming and idyllic for this family, even though the father, called “Babe” by Pat, suffers from a disability that keeps him from walking well and requires Jay’s mother to earn a living cleaning hotel rooms. While Jay frequently mentions his father’s condition, he always looks on the positive side, believing that having his father around so often had a stabilizing effect on his childhood. In fact, he tells a funny story involving Pat’s attempt to give Babe a bath; watching Pat trying to carry his father to the tub and navigate him around the stairs makes for great laughs for both Jay and the reader.

Jay obviously idolizes Pat, remembering his good-natured horseplay, as well as his brother’s love of books and strong self-confidence. As in every family, there are arguments, such as when Jay twice borrows Pat’s bike without asking, but all is patched up in the end.

Written in a straightforward, conversational style, The Call of Friends reflects on the pleasures of a simpler time, when children played outside all day, until their mothers called them in. Charming and optimistic without being sentimental, The Call of Frineds will appeal to readers who lived through similar times, as well as those curious about life back then.