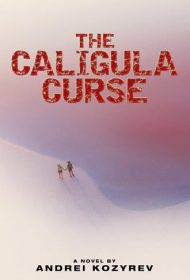 Author Andrei Kozyrev, who served as Foreign Minister of Russia from 1990 to 1996, brings his experience to bear in The Caligula Curse, a novel about a deep-seated conspiracy running through Russia’s past and into the story’s present.

American doctor Pat flies to Russia as part of a humanitarian effort and, in making friends, falls in love with Victor, who is part of Boris Yeltsin’s pro-democracy government stepping forward as the Soviet regime crumbles. Corruption puts a strain on their relationship, however, as Victor changes from the young idealist Pat knew.

Meanwhile, Father Dmitry, a sinister priest of the Eastern Orthodox Church (Pravoslavie in Russian), meets with various government agents to curry influence. Along with Dmitry, Pat’s family knows of an ancient shamanic recipe, first used by her ancestress Julia Drusilla, that has corrupted rulers from Caligula to Ivan the Terrible. Pat and friends risk their lives to travel to the Suzdal region to find the source for this potion that has ruined empires.

While an interesting conceit, the story suffers from numerous flaws. Scenes begin and end briskly, but for much of the action, there’s little at stake besides an apparent effort to explain changing currents in Russian politics. Dialogue and interior monologues are freighted with exposition that drains dramatic tension.

The cast is packed, with new characters continuously appearing, few characterized well enough to leave an impression. Thin or unexplained character motivations, along with frequent shifts between points of view, confuses the action within scenes. The secret potion and mysterious hints of a “Caligula curse” function as little more than a MacGuffin, and even in a final firefight, it’s not clear how characters converged or who dies.

While the author’s obvious insight into Russian character and culture is intriguing, the novel’s disjointed action, lack of character development, and muddied plot are likely to frustrate rather than engage readers.