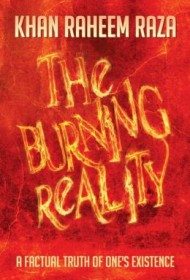 For as long as there have been people wondering how best to live their lives, there has been someone eager to dole out advice — from philosophers to prophets to relatives at Thanksgiving dinner. Enter a new voice to the mix: Khan Raheen Raza.

Raza’s self-help book, The Burning Reality: A Factual Truth of One’s Existence details his view of what’s wrong with the world and how others should navigate such a flawed place. His topics range from honoring parents, to handling money, to staving off sexual assault. He strings together fictional examples mixed with quotes from pop culture and literature — yet to no real end. For example, he writes of one woman who feels forced to trade sex for money to pay for her brother’s medical needs. The parable improbably concludes that the brother is so upset by this that he kills himself. There’s no clear moral, except to suggest that maybe after all she has endured, she could still hold onto her dreams and better herself.

Raza’s writing is extremely difficult to follow (to wit: “…you might have in your life thought about ‘why people are treating each other for just benefits rather than fulfilling the relation they have as a true sibling, boyfriend, or wife?’”). It could be an issue of culture and translation; the stilted word choice and grammatical errors suggest English is not his first language. Raza admits up front he is not a writer.

The larger issue, however, is bombast. Raza presents an arrogant stance that is likely to be off-putting to readers. He warns: “If you don’t turn around and stand my way, then you’re living this life no better than an inglorious reptile in the mud.”

Not a good strategy to attract mere mortals.