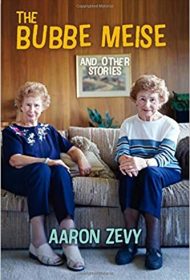 With the ease of a practiced storyteller and an outrageously droll sense of humor, Aaron Zevy (“Ronnie” to his friends and family), presents an anthology of rollicking personal essays and fictional short stories in his latest offering: The Bubbe Meise and Other Stories.

Similar to a “Bubbe-meise,”(a Yiddish word meaning a grandmother’s fable or old wives tale), Zevy’s stories present real and imagined characters and events, which the author admits he has embellished. “This book is a work of both imagination and lived experiences mixed together to delight and entertain. Do not assume anything in this book is true or accurate… Enjoy,” the author writes.

The first part of the book offers stories based on his life. Topics range from corned beef to golf and failed romances. Most take place in Toronto, Zevy’s hometown. A la Woody Allen, Zevy is frequently the butt of his own joke. Of a poker game, he remarks, “The other players at the table have stacks of chips that look like high-rise apartments. My chips look like a pup tent pitched in the backyard.” Zevy banters with his friends, Goldfarb and Lewberg, using effective one-liners and wielding expletives like sesame seeds on a bagel: “Wait what? Uncle Haim is the motherfucking guest of honor?”

Zevy can’t seem to get out of his own way when wooing potential girlfriends. While attempting to impress a woman with his waterskiing prowess, he manages a spectacular high-speed crash instead.

The book’s final section features five reflective fictional stories. Zevy writes of failed marriages, murders, and miscarriages. The last tale, “The Card Game”, depicts bickering card players, who, it is slowly revealed, have followed Moses into the desert and await his descent from the mountain top. As the story unwinds, the author’s storytelling skill becomes unmistakable.

Zevy’s self-deprecating humor makes him an irresistible character. His easy-going prose and fast paced, sitcom-style conversations create laugh-out-loud and sometimes poignant moments. While those unfamiliar with contemporary Jewish customs and religious traditions may miss the subtler culturally related humor, Zevy’s facile comic ability will appeal to anyone willing to find humor in the human condition.