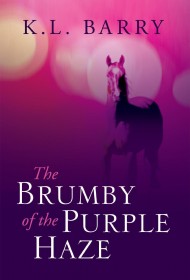 It is within that delicious uncertainty of what is real and what is imagined that the best ghost stories dwell. K.L.Barry has found such a sweet spot in a gem of a tale called The Brumby of the Purple Haze.

The slim book reads like a young girl’s diary or letter to a friend — complete with misspelled words and questionable grammar and punctuation — as she recounts the mysterious happenings one day after school when she has her first encounter with a scraggly white horse that suddenly appears through the misty haze of the deep woods as she takes a ride on her horse. A “brumby” is what the locals in the remote bush of Australia call such a feral beast.

The girl is both afraid and intrigued. But what were those muffled, giggling voices that seemed to come from the underbrush? Did she really hear them?

The mystery deepens as the girl sets out a few days later to locate the horse again and suddenly finds herself in peril as odd creatures come to life around her. Or do they? Maybe it was all just a dream that occurred when she fell unconscious after being thrown when her horse was spooked. But then why did her mother later say she also saw a strange white horse appearing at their house, seeming to signal that her daughter was in trouble?

The simplicity of the telling and the believability of a lonely girl on the cusp of adolescence make the story truly shine. The prose is spare yet stays true to the Australian bush country setting and most of all to the girl’s character. While the story starts a bit muddied and slow, readers will soon be captivated by the goings on in the wild woods. This one is worth a read.