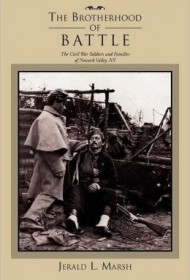 The American Civil War took the lives of well over 600,000 soldiers in one dreadful, unimaginably bloody battle after another. At the onset, men on both sides believed, for different reasons, that it would be quickly concluded; going to war was for many young men an adventure. Few expected it to last four years.

Jerald L. Marsh, a former U.S. Air Force and Vietnam veteran, is passionately interested in this war and the price so many paid. Here, he has limited his study to New York State and Newark Valley in particular. He writes, “This is not another of the thousands of books about the causes of the American Civil War, the history of the War, the battles, armies or generals. Rather this work profiles and honors individual soldiers of Newark Valley and environs who sacrificed so much in the war and the families who supported and suffered along with them.”

Marsh has made it his task to create a compendium of all of these soldiers. The author identifies the men by name, age, the battles they participated in, and their ultimate fates. Varying in length from a few lines to several pages, the entries make for poignant reading. One young man writes to his mother: “I hope we shall meet again and see each other face to face.” Three days later, he was killed in action. By contrast, another entry chronicles the life of Orville Dickinson, who enlisted at age 19 in 1861, was wounded in action at Gainesville, Virginia in 1862, and went on to live to age 75.

Marsh is a clean writer who offers the facts clearly and without embellishment. This is obviously a labor of love and will be a valuable tool for researchers. General readers will most likely dip in and out of the stories selectively. All will appreciate the way the author has put human faces on the terrible toll taken by the Civil War.