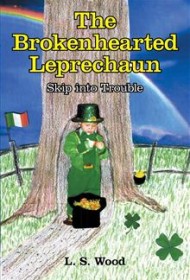 After drinking too much liquor, Skippy, a young leprechaun wakes up to discover he is a stowaway on a ship, headed out to sea in this book aimed at children of an indeterminate age.

Skippy lives with his grandparents in Ireland, his parents having mysteriously vanished years ago. Determined to find them, Skippy sets out on his own. Then he overhears a man, Vinnie, talking about his plans to journey to America to find “gold” (although Vinnie’s idea of “gold” is finding a job and earning a good living). As a young leprechaun who hasn’t any gold coins to his name, Skippy follows Vinnie, undetected, to his room at an inn.

After secretly imbibing Vinnie’s stashed scotch, Skippy falls asleep and finds himself in Vinnie’s travel trunk, on a ship bound for America. Arriving in Boston, he follows Vinnie as he searches for work. But soon, Skippy becomes plagued by horrible visions of his parents being held captive by an evil man and the story offers new twists.

Author L.S. Wood’s strongest suit lies in occasional well-written descriptions: “He next observed a short [sic] heavy built [sic] balding man…come quickly waddling down the walkway like a duck trying to run away from a fox. He wore a poorly made toupee half stuck to his balding head [sic] which had slid halfway off, hanging in disarray up against a cauliflower looking right ear.”

Unfortunately, too much time is spent on unnecessary detours: Vinnie befriending a family and taking over their blacksmith business, Skippy pulling pranks and so on. In addition, it’s difficult to determine the book’s intended age group. In addition to a detailed description of a severely abused horse that finally succumbs to death, Skippy routinely take pleasure in cruelly torturing a bull and the book includes detailed descriptions of Skippy drinking alcohol.

These issues and the story’s meandering plot soon grow tedious, unfortunately, and only doggedly determined readers are likely to persevere until the happy ending.