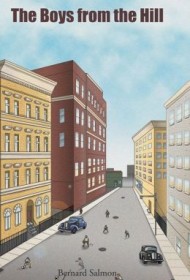 In his novel, Bronx native Bernard Salmon paints a vivid picture of adolescent life in the Big Apple in late 1940s and early ‘50s. From the joys of stickball games and weekend dances to the violence of interracial gang fights, car thefts and drive-by shootings, Salmon succeeds in establishing a unique mood.

The “boys” from the title are six teenagers from the same block who travel as a pack, occasionally lashing out at one another but always sticking together against youths from other neighborhoods. Johnny Cleary and Tony Russo take center stage in the episodic tale in which one boy takes a wrong turn that destroys him, while the other, despite family tragedies, makes a successful life.

Readers from the Heartland will find the Bronx sense of morality hard to fathom, as the boys steal cars, go joy riding, have brutal gang fights and shoot an innocent boy at night — then go to mass and take Communion the following morning. Movies, books and plays such as Blackboard Jungle and West Side Story may have done it better, but The Boys from the Hill gets the point across that growing up in New York was different from other places.

That is not to say that Salmon’s novel does not have problems. The first half of the book is relayed in a rapid pace (despite several unnecessary scenes that might have been edited out), but the second half, in which the author almost seems to preach to readers about the boys’ religious conversions, slows down considerably. And the language throughout is inconsistent. After pages written in the vernacular of undereducated youths, suddenly readers will come across a sentence like this: “Just as the confluence and a conjugal mingling had previously occurred along the continuum of their lives, now a divergence was inevitable and timely.” These asides distract from a mostly entertaining read.

Salmon is at work on a new novel. The talent is there; consistency should follow.