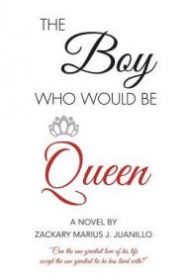 The Boy Who Would be Queen is a sincere but rough-hewn contribution to gay lit.

In this story, struggling restaurateur Alfredo Montgomery promises his unborn daughter’s hand in a future marriage to the spoiled son of their town’s kingpin, Jonas Gould—if Gould will put Alfredo’s affairs in order. When the child inconveniently turns out to be male, vast deceptions and deep psychological trauma unspool as Robyn Rose Montgomery is raised as a hyper-feminine girl as part of his dictatorial father’s outlandish scheme to get himself out of debt.

Set in a fictional city called Urgello (nation unspecified), Robyn’s quest is for true love. But his obstacles are huge: the soulless Alfredo abuses both Robyn and his saintly mother; the unsuspecting (too unsuspecting, and fantastically chaste) bridegroom in the sham marriage explodes when he learns the truth; our poor hero remains adrift in personal limbo. “So Robyn continued his life even to the very hurting minute.”

But author Zackary Marius J. Juanillo suffuses his story with hope. At a climactic banquet attended by all the townspeople (the book’s most vivid scene), the process of healing old wounds begins, and, in the end, an ironic turn of fate may even bring Robyn love and peace.

Juanillo, who wrote this first novel at age 22, shows signs of literary promise with this story. He has a gift for dramatic tension and timely plot twists and understands well the issues of gender identity and sexual ambiguity that drive his story.

Unfortunately, the daughter-for-sale bargain is not entirely believable, since it’s tethered to no specific culture where arranged marriage is practiced. And the prose contains numerous punctuation errors and frequent awkward wording, as in: “Michael flinched his eyes and asked Robyn as to what he was talking about.”

Still, the ending brings a satisfying conclusion to a heartfelt work, even as readers may wish the author had taken more care with syntax, grammar and plausibility.