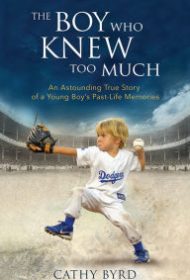 ­­­­­­­­The Boy Who Knew Too Much chronicles author Cathy Byrd and her husband’s struggles to come to terms with their son Christian’s assertion that he had once been baseball great Lou Gehrig.

At age two, Christian shared his memory of being a “tall baseball player” in another life. He subsequently offered astonishing historical details, including many references to the bad blood between Gehrig and Babe Ruth, and even asserted that the author herself had been Gehrig’s mother.

Christian’s fascination and talent for the game defied explanation; his big leg kick when winding up to toss a ball rivaled those of much older kids, and he attacked the sport with “laser-like focus.” After Byrd shared Christian’s baseball talents on YouTube, he was recruited to play a bat boy in Adam Sandler’s movie That’s My Boy. He became the subject of numerous interviews and a documentary, and was invited to throw the first ball at a Dodger’s game.

This book is as much about the author’s attempt to shield her family from the skepticism of others whose religious beliefs clashed with the concept of reincarnation as it is about Christian’s moment of fame; even close friends admonished her to “get over it.” But eventually, the author reached a turning point: “I became less concerned about being criticized by others and more committed to searching for the truth.”

Commendably, Byrd shares her ambivalence about reincarnation as she recounts Christian’s story. And if her desire to see her son succeed can sometimes make her seem like a stage Mom, her belief in his narrative appears genuine.

Readers who refuse to consider the possibility of reincarnation will likely find this account disputable. But those with open minds will discover a fascinating study about how child prodigies like Christian can prosper in a largely average world and appreciate its lesson about the unexpected gifts that result when you’re willing to suspend, rather than be a prisoner, of your most cherished beliefs.