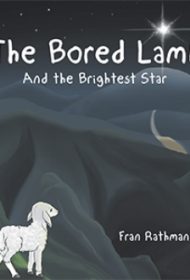 In The Bored Lamb and the Brightest Star, a restless lamb named Curly inadvertently becomes part of the Nativity scene when his curiosity gets the better of him.

Curly, who lives in the hills of Bethlehem, is a dreamer, constantly frustrated by his family’s mundane life, which consists of searching for fresh grass to eat. When his flock sets off for a distant field, Curly gets distracted by a bright star in the sky. With Mamma’s permission, he decides to follow the star and is the first to crest the hill and see what lies on the other side: a group of angels welcoming the birth of Jesus.

Curly leads his family to the manger where Mary and Joseph tend to the baby Jesus, forever cementing Curly’s place in biblical lore.

Curly is an extremely relatable character. Parents will recognize Curly as having the same qualities as a bored kid, and astute kids might see themselves in Curly. “You always want adventure and excitement,” Curly’s mother tells him. “You must learn to enjoy the ordinary things in life.” But Curly’s decision to follow his gut and go beyond the commonplace changes his life forever.

Although the elements are relatable, the writing can be repetitive and overly detailed (“Little lamb Curly ran across the field, climbed to the top of the hill, and looked over at the other side of the hill. He turned around and ran down the hill and across the field to meet his mother”). Also, the story contains minimal conflict besides Curly’s boredom. While Curly’s mother alludes to wolves, he never encounters any predators.

Despite these issues, The Bored Lamb and the Brightest Star gives readers an interesting glimpse into the life of a biblical bit player, demonstrating that while it’s important to be grateful for life’s little things, it’s also important to follow your heart and see where it leads.