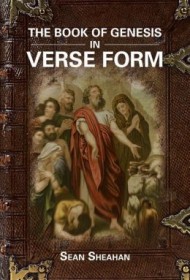 Sean Sheahan’s The Book of Genesis in Verse Form is a series of 19 poems that highlight the most popular stories found in the first book of The Bible, including the prefatory, apocryphal account of the war in heaven and the fall of Lucifer (Note: the biblical Genesis begins with the creation of the world, though Christian tradition holds that before the full formation of the world, certain angels of God turned against him and were defeated in part by the warrior archangel Michael).

The retired senior office of the Irish Civil Service writes in simple rhyming eight-line stanzas, targeting his poetry for young readers. His poems include the accounts of Adam and Eve, Noah and the Flood (Noah is named Noe in this book) and Sodom and Gomorrha, as well as the adventures of Joseph, the prophetic dreamer of the Old Testament. The rhythms Sheahan uses are as familiar as the stories, but he does something that most renderings of the Genesis story fail to do: He makes it fun. Poetry is, after all, really just songs, and in his book, Sheahan sings these tales of heroism and foolishness. In the process, his poetry takes on a mixture of mythos and just plain mischief, which makes for enjoyable reading.

This book is not a word-for-word translation of the Genesis story, so readers looking for a work of scholarship should look elsewhere. But if you’re looking to revisit some of the old stories you remember from Sunday school or to introduce new readers to the Bible in an open-hearted fashion, then you’ll find much to like in this short, endearing book.