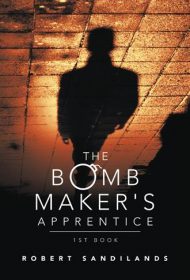 In this thriller, a former soldier finds out that man’s cruelty to man knows no bounds, even outside a war arena.

Richard Barton, an ex-military man, decides to join a crime syndicate to find out what has happened to his brother, Corrie, a low-level criminal. Corrie disappeared six months ago, and even though Richard and his parents believe that Corrie is dead, the police haven’t turned up any useful information.

To bring closure for his parents and to get to the bottom of the matter, Richard joins an organization headed by the wheelchair-bound and much-feared Mr. Randell and his assistant Eva Damston. Unbeknownst to Richard, however, Mr. Randell is under siege from other criminals, intent on muscling in on his business. As Richard crosses paths with other crime boss wannabes, such as the sadistic Cecil Hussey, he— and his father — are caught in the crosshairs, and Richard must determine whom to trust.

Robert Sandilands’ book is non-stop action, with characters dodging bullets and bad-guys. However, while Richard is a likeable hero, he and the other characters are woefully underdeveloped. Without their backstories and motivations fleshed out, readers can’t understand how the characters reached this point in their lives. For example, readers learn that Corrie was shot — and died — while on a job to place a bomb in a warehouse. Yet his father says, “We know your younger brother was a petty crook…but guns and bombs? No way.” There’s nothing to explain this father’s sadly misguided view of his son. And without distinguishing stories, it’s hard to remember one character from the next.

Compounding the story’s issues, Cecil Hussey’s violence and sickening perversions —in one scene, Hussey pours boiling water in a woman’s vagina—are well outside most readers’ comfort zones. Additionally, the book is replete with missing words and grammatical errors.

In all, the story requires thorough revision in order to appeal to a general audience.