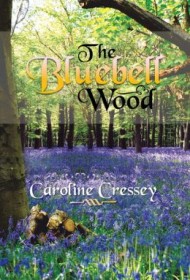 A hefty novel of slightly more than 500 pages, The Bluebell Wood presents a cry for peace and universal tolerance.

The story’s heroine is a saintly Irish nun called Sister More, headmistress of the fictional Stella Maris Convent school, not far from London. Endlessly patient, faultlessly dedicated, she oversees abused and traumatized girls “from all four corners of the world” who are clearly meant to embody all the world’s strife.

Leah, is a Beirut Jew whose mother was shot to death. Magdalena has survived the cruel depravities of dictator Ceausescu in Romania. Jonquil, whose seven brothers are all damaged or dead, is scarred by sectarian violence in Northern Ireland. Rosalinde is a Coptic Christian from starving, AIDS-plagued Ethiopia. And so on.

“Please, God,” Sister More prays, “let there be atonement, with no division to spread war in the world.”

A British-born psychiatric nurse who moved to Brisbane, Australia, in 1983, author Caroline Cressey is admirably passionate about child welfare, women’s rights and the prospect of political sanity spreading its wings. But her writing suffers from abstraction and grandiosity. Sample: “The odyssey and the human spirit that interprets the unexplained and inexplicable wonder of our creation filled him.”

She also has a weakness for reductive geographical/historical sketches that seems plucked from the Internet. Bucharest becomes “the Paris of Eastern Europe”; Lebanon is “the Switzerland of the Middle East”; an afterword on war-torn Syria is mostly a compilation of statistics.

Seemingly well-read, Cressey invokes everyone from Graham Greene to Jean-Paul Sartre, Leonardo da Vinci to the Dalai Lama in her heartfelt plea for tranquility and order. While another voice in the wilderness is always welcome, readers will find that her novel presents more challenges than satisfactions as it conveys its important message.