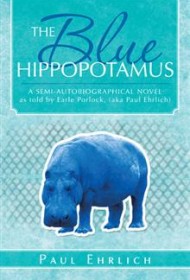 Some people have led interesting lives — and then there’s Earle Porlock, author Paul Ehrlich’s alter ego, which stars in The Blue Hippopotamus. Much of this story encompasses a top-secret mission during World War II, in which Earle and five other men parachute behind enemy lines, rescue an important prisoner from a concentration camp and find their way back to England. Seventy years later, as the last survivor, Earle breaks his vow of secrecy and reveals the details, along with how he grew up fast, fell in love and became a celebrated hero.

Earle’s story about his life is full of adventures. Many are heroic, such as the sabotage of a Nazi raid that ends in a barrage of gunfire. Some are incredulous, like Earle helping his friend “The Guru” steal a 3,000-year-old blue hippopotamus from the Metropolitan Museum of Art. Another story is about love; Earle spends three days with a woman in Germany who became the love of his life, though they would meet only three times after the war.

Earle tells these stories in a play-by-play style without revealing many details of the characters’ emotions, which sometimes works (the tale of the frightening not-so-safe house the team enters and Earle’s love story) and sometimes doesn’t (the few times he discusses with his friends what to do next in life).

Though the stories are interesting, at times it feels as if Earle is trying too hard to come off as exceptional, by having other characters talk repeatedly about his “special talents and abilities,” by retelling stories throughout the book and by devoting entire chapters to characters discussing what he’s meant to do with his life.

That said, if half these incredible stories are true, many readers would agree that Earle Porlock (aka Paul Ehrlich) is something special, especially for fans of WWII fiction and nonfiction.