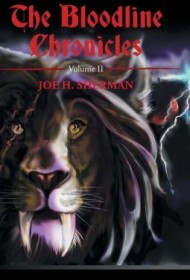 Set in a medieval fantasy realm, this second installment in Joe H. Sherman’s The Bloodline Chronicles continues the storyline about two brothers with incredible supernatural powers and their quest to find their place in a world where they are largely misunderstood and feared.

Sorram and Taurwin, brothers with a penchant for hunting, have befriended a group of dispossessed farmers and are helping them relocate. The group was hired by a retired general to help develop the western quadrants of his estates and make the land more profitable. But they have become targets of the lord of the local city and, after the farmers experience persecution and brutalization, the brothers exact swift and bloody revenge.

To complicate matters, a legendary battle mage who essentially created the brothers and an evil emperor who is not what he appears enter the fray with their eyes on the brothers and their singular abilities.

The first novel succeeded largely because of the fascination surrounding the mysterious circumstances of Sorram’s and Taurwin’s origins as well as the looming question: “What is their ultimate purpose?” That element is greatly diluted here, overshadowed by a storyline with no real plot twists or bombshell surprises, leaving readers able to predict what will happen after the first few chapters.

The writing is also flawed, containing awkward sentence structure and grammatical and punctuation errors (“Trentos heard the bones, [sic] in Maypes hand pop and crackle as the bones shattered …”). Perhaps the biggest misstep is the inclusion of modern idioms that should never appear in a medieval fantasy (“blow a gasket,” in a world without engine gaskets; “What in the Sam hill”; “monkey’s uncle”; “grinning like a Cheshire cat”). These phrases could have easily been replaced with words more conducive to a fantasy narrative.

That said, Sorram and Taurwin remain fascinating characters, and fantasy fans who have invested time reading the preceding novel will no doubt be curious to see what becomes of them.