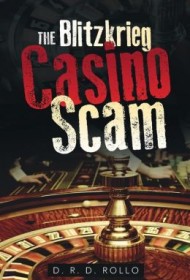 D.R.D. Rollo’s new thriller follows a gang of casino cheats and the casino manager determined to put them out of business.

The small Italian town of Tolo has fallen on hard times, but its mayor, Marco Capone, and his criminal brother come up with a creative plan to refill the coffers. Laid-off workers from Tolo’s now-defunct casino train the town’s young men to be casino cheats and unleash them en masse on the world’s wealthiest gambling establishments.

When the cheat team takes the casino Sam Morris manages for nearly a million euros, Morris loses his job. But the hard-drinking and somewhat world-weary Morris lands on his feet, retained by the casino bosses to investigate this new “Blitzkrieg scam” and catch the people responsible. Morris must figure out where the Blitzkrieg team will hit next and how to stop them. Meanwhile, the cheats must hit the richest targets possible and stay a step ahead of the authorities. Their struggle culminates in a series of bloody scenes, which are a bit jarring given the more cerebral material that has gone before.

Novels written from multiple points of view often fall prey to a particular flaw: One point of view is far more interesting than the others. The Blitzkrieg Casino Scam suffers to some extent from this lopsidedness. Morris is a sympathetic, engaging hero, and readers are likely to miss him when the action turns elsewhere. The determination and chutzpah Capone and his gang show in their efforts to save their town are compelling, but the cheats never become as three-dimensional as Morris.

Nevertheless, The Blitzkrieg Casino Scam is a jauntily written, fast-paced, often funny caper novel. (A scene featuring a drunk Scotsman who admires Winston Churchill is especially hilarious and could have fallen flat in the wrong hands.) Fans of the genre will find much to enjoy here.