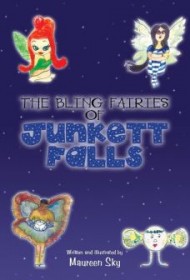 Maureen Sky’s picture book, The Bling Fairies of Junkett Falls, presents a creative setting that might engage those young readers interested in fairies, but the dense, text-heavy narrative often seems targeted toward an adult audience.

In this book, the setting is spotlighted far more acutely than the story itself. While the fairies are described in exacting detail, the plot remains cloudy throughout. A fairy named Velvy is slated to perform a “spin.” This act has an unclear purpose, but the thought of it makes her very nervous. It is likely intended to be a coming-of-age moment for fairykind.

When a “dust bust” occurs, brought on by humans using powders or perfumes in the vicinity of the fairies’ jewelry-box home, Velvy finds herself faced with a frightening dragon named Heatedflame. Velvy angrily confronts the dragon, insisting she doesn’t have time for his attitude, and the dragon graciously apologizes. A few pages later, a group of evil creatures called “Nuds” attempt to commit a robbery but are foiled by Heatedflame.

The book’s penchant for abrupt transitions is highlighted by a heavy use of section titles. The language, themes, and descriptive text are too mature for young readers (“Sarahcie also suffers from low self-esteem due to her weight problem,” reads one sentence). Additionally, while most pages feature an illustration or two, the text is dense and will be daunting for youngsters. In the end, it’s hard to determine a target audience, as the contents seem too mature for younger readers and too simplistic for older ones.

Young readers with an insatiable love for fairies and all things magical may find something to appreciate in this book, but they will need an older reader to navigate the vocabulary and plot for them. An admirable and creative effort, The Bling Fairies of Junkett Falls nevertheless misses the mark.