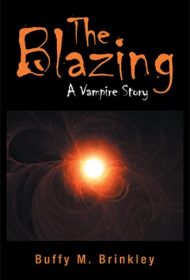 Though Buffy M. Brinkley’s The Blazing is billed as a “vampire story,” its central theme is the triumph of true love.

Richard Ambrose is a vampire intent on sparing innocent lives. Despite the influence of Malcolm, his brother who has no qualms about slaying human beings for food, he targets only those who commit crimes.

When Viveca Moreau, an eight-year-old orphan living in New Orleans, is set upon by assailants, Richard saves her life. As Viveca grows up, progresses through college and eventually becomes a police detective in the Big Easy, Richard appears to Viveca as a vision in dreams.

It’s only after the murder of Viveca’s childhood friend that Richard and Viveca finally connect in a real-world context. The murder, which Viveca is tasked with investigating, has left the victim drained of blood, with bite marks in her neck. To protect Viveca from his own brother, Richard reveals himself to her as a vampire, one who has been watching her since childhood.

As Viveca and Richard reconnect, the pair face immortal adversaries and desperately seek redemption in the Blazing, a perilous process that can, in theory, save Richard from himself. Malcom is only one of the dangerous challenges standing in the way.

In less than 300 pages, Brinkley seeks to present a drama stretching over centuries, starting with Richard’s conversion to vampirism in the 18th century. Taking cues from the Twilight series, the author aims to put a new spin on the “vampire loves human” template.

The results are mixed. Brinkley’s writing style is polished and straightforward; she establishes the romance with an easy pace, clear imagery and a strong sense of action. However, the story feels one-dimensional. The romance is shallow, the characters oversimplified. Too often, the main figures come across as caricatures, and the central love plot feels somewhat like a generic Harlequin romance.

Still, for fans of Twilight or romances in general, Brinkley offers some interesting twists while covering well-trod ground.