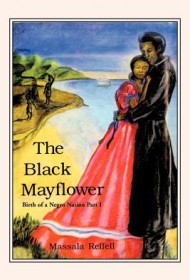 Historical fiction can educate while it entertains, leaving readers richer for their investment of time. The Black Mayflower has an amazing premise to work with but doesn’t always succeed in bringing history to life.

Set in the early 1800s, this novel tells the story of several groups of people: freed slaves who are offered a chance to return to Africa; the Quakers and others who help with the colonization effort, and the natives who resist Liberia being taken over by people they viewed as invaders despite their common heritage. Friendships and romance bloom while the effort to build a society meets with armed resistance.

This first volume in a proposed trilogy by Massala Reffell offers some positives. There are several exciting scenes when a group of settlers venture out to hunt and meet natives, and later a particularly fitting end comes for one of the more despicable characters.

But such moments come too rarely, and the narrative is in need of significant editing. The text includes typos, but the larger issue is the uneven writing. Informative sections overstuff useful history and background into a few pages, sounding like encyclopedia entries. Alternatively, pages of dialogue are used to convey information that a sentence or two could easily establish. Characters use words like “atrabilious” in casual conversation, making the dialogue seem stilted and unnatural.

In addition, the author tends to “tell” rather than “show” readers what characters are doing and feeling.  More could be conveyed with fewer words if those words described characters in action, rather than leaving readers as spectators. And finally, Reffell has oddly indexed the book for easy access to key references, atypical and jarring for a novel.

The Black Mayflower is part of a series of stories that has the potential to be both juicy and educational. To get there, however, the novel requires revision for both content and context.