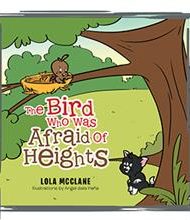 In The Bird Who Was Afraid of Heights, a young bird faces the realities of growing up when the time comes for him to fly and he finds himself terrified of heights.

Augie spends much of his childhood giggling with his sister but becomes lonely when she learns to fly and starts spending her days away from the nest. This is when Coleman, a neighborhood cat, enters the picture.

At first, Augie believes Coleman is taunting him before turning him into lunch. But he comes to realize that Coleman just wants a friend. The cat is bullied because his young owner treats him like a doll, often dressing him up, which earns derision from the local felines. When Coleman learns that Augie isn’t taking advantage of his wings, it becomes his mission to help his new friend. With Coleman’s encouragement, Augie overcomes his fears and learns to fly.

The themes of friendship and resilience in The Bird Who was Afraid of Heights fit the story well, delivering important life lessons while naturally supporting the story. That said, the text of this book would have benefitted from a professional editor. At nearly 60 pages, most of them dense with text, the story quickly feels like a slog. The dialogue also seems stilted and repetitive (“Just don’t look down. Just look at the limb or up ta [sic] the top of the tree. When ya [sic] jump off the limb, try ta [sic] jump up ta [sic] the top of the tree.”)

Finally, the formatting of the book, with text often superimposed over illustrations, makes the words difficult to read.

The Bird Who Was Afraid of Heights is a compelling idea, but its execution presents too many obstacles for young readers. As a result, it never quite takes off.