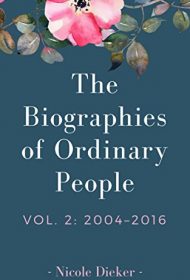 In this second volume of The Biographies of Ordinary People, readers are once again invited to follow the lives of “the Gruber girls,” their parents, Jack and Rosemary, and the family friends introduced in Volume 1.

As the story picks up, the Gruber girls are in various stages of establishing their adult lives. Jackie has just graduated high school and is moving on to college; Natalie is finishing college; and new college grad Meredith is bound for Minneapolis for an internship with a theater company.

But life doesn’t always go as planned. Meredith settles into her new apartment in Minneapolis only to get some bad news, and Jackie is soon advised that she doesn’t have the talent necessary to follow her dream of becoming an opera singer. There are questions about sexuality, thwarted romances and surprise opportunities that open new doors. But in good times and bad, they always remember that they are “the Gruber girls.” Or, as Natalie explains, “She was a Gruber kid. She did her work and got her grades.”

The novel — modeled after Little Women according to the author’s note — is organized in short chapters (some composed only of one page) with titles that describe the key movement of the scene; for example, “Jack takes Meredith apartment hunting.”

While the novel is short on plot, the writing is precise and wonderfully descriptive. In an early scene when Meredith receives mail she expects to be good news, “… she tore into the letter like her hands were as hungry as she felt every night.” On a date with Jack, Rosemary notes she once knew all Jack’s students. “Now they were all just students, in and out of Kirkland like clouds.” The dialogue is natural and realistic, the characters fully developed and individual.

Overall, the author’s style, characters and their evolution as the family grows and changes make for a fun and engaging read—one likely to be appreciated by fans of literary fiction.