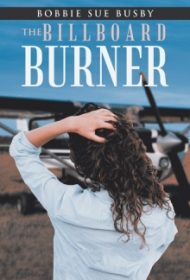 The Billboard Burner pivots around a chance encounter between a stranger in town and a local single mother who believe they have experienced love at first sight.

Mark Smythe arrives in the rural town of Tepid Springs after setting a billboard on fire. He is paid by an activist group to regularly commit arson in an effort “to destroy advertising moguls who blatantly lied and touted their products as the best.” Heading toward the Red Rock Café, he glances across the street and sees Ruby Jewel working in her studio where she designs advertising campaigns. When Ruby enters the café, he picks up the tab for her white mocha.

But any chance of the two becoming better acquainted ends when the sheriff’s deputy comes to the café to question Mark about the fire. Later, Mark searches for Ruby, but she’s not in her studio, and so he leaves a note and takes down the phone number from her studio window. Romance ensues — even as Mark finds himself eluding the law.

While the story involves criminal acts that could send Mark to prison, this isn’t a dark investigative tale, but rather a lightly toned story that reads like a romantic fantasy with a dash of adventure thrown in. Because of Mark’s police troubles, their meetings often occur in secret, making for a late-night plane ride to a mystery city and other stolen moments orchestrated by Mark’s friends.

While entertaining at times, the story is largely predictable. Mark is the stereotypical ladies’ man who generally refers to Ruby as “darlin’.” Ruby is the sacrificing, single mom. Their almost instantaneous romance seems a stretch at best. Additionally, there are numerous editing errors, most notably, Mark becomes Marc, then Mark again, while the Red Rock Café changes to the Redrock.

While readers looking for a fresh take on romance aren’t likely to find it here, the story may appeal to those interested in a light, romantic read.