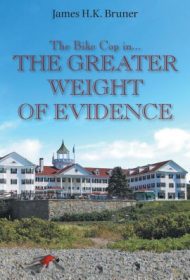 The Bike Cop in the Greater Weight of Evidence is a delightful novel by James H.K. Bruner, an attorney who splits his time between Florida and Maine.

Protagonist Digger Davenport is a 19-year-old college student and budding sleuth. His interest in law enforcement began at age 11 when, while fishing one morning in Port Talbot, Maine, he snagged a murder victim’s body. The subsequent investigation and his later testimony at the trial of the accused, sparked a fascination that only grew with time.

Digger is now at the University of New York, studying criminal justice. It’s the summer after his freshman year, and he’s in Port Talbot, where his family has a summer home, working as a bicycle patrol officer (a “copsicle” in local vernacular). His mundane duties—enforcing parking regulations and keeping traffic moving—soon are set aside when a young woman who worked a summer job at a local hotel is found dead. Local authorities, some looking to make points before an upcoming election, quickly arrest a young black man for the crime. Digger, though, does some investigating on his own in search of the real killer.

The author makes a few minor missteps. For example, the story is set in 1978, but Digger employs a variation of the catch phrase “I’m not a doctor but I play one on TV,” which didn’t become part of America’s lexicon until 1984 when used for a TV commercial for Vicks Formula 44 cough syrup.  And a key character seems to mostly vanish in a busy final few chapters.

Nonetheless, Bruner has done an excellent job. He’s a skillful writer who, drawing on his legal background and familiarity with life in a resort town, keeps the plot moving and holds readers’ interest. Entertaining but not overly taxing, Bike Cop is a perfect beach read.  Even better, Bruner reports at book’s end that there’s a second book in the works—something to look forward to for next summer.