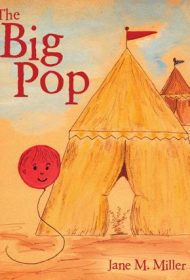 Living at the circus without other balloons to play with, Red Balloon decides to float away. He meets Yellow Balloon, and when they pass each other, Orange Balloon appears. Red and Yellow find two Blue Balloons, and as Red and Blue dance together and Yellow and Blue do the same, Purple Balloon and Green Balloon appear. As all the balloons dance faster and faster, a giant “Pop!” sounds, they explode, and a rainbow appears in their place.

The story is a nice introduction to primary and secondary colors, and offers a fun, fanciful origin for rainbows. There’s even a subtle message encouraging exploration and diversity, seen when the book’s omniscient narrator says the balloons were “having so much fun they forgot to be afraid of the new colors.” The art is pleasant, and the balloons are drawn with friendly, human-like faces and expressions.

However, some inconsistencies confuse the storytelling. The narrator mentions that Red and Yellow keep “disappearing themselves,” which implies that Orange only appears as a temporary combination of the other two; the accompanying illustration supports the idea by showing Orange with one face but two string tails (as do later images of Purple and Green). But near the story’s end, before the rainbow appears, seven balloons are shown on the page simultaneously, which would be an impossibility according to this conceit.

Additionally, when Red meets Yellow, multiple Yellow balloons appear on the page, with a face visible only on the nearest one. This seems to represent movement, but without motion lines, the illustration is confusing. Also, two of the balloon colors (red and blue) aren’t represented in the rainbow.

Finally, the story suffers from grammatical issues, such as missing commas and incorrect capitalization.

Children might enjoy The Big Pop despite its flaws, but further polish is needed to make this a professional offering.