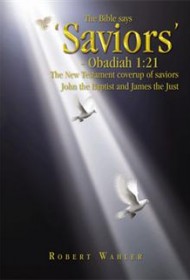 In The Bible Says ‘Saviors’—Obadiah 1:21, Robert Wahler argues that the writers of the New Testament intentionally covered up the importance of John the Baptist and James the Just in the development of Christianity.

For the author, Jesus, the central figure for mainstream believers, is little more than a fabrication to prevent people from understanding the true nature of God and the Holy Spirit. He argues that many versions of the Bible are filled with mistranslations and that his book will present “significant new information to guide others in the direction of forming the complete story of how ‘The Greatest Story Ever Told’ came to be, which really should be recognized as ‘The Greatest Cover-Up of All Time.’”

This is a bold, yet somewhat familiar, statement. Drawing heavily on the work of Bart Ehrman and Robert H. Eisenman, two popular scholars who have pointed out historical and textual inconsistencies in the New Testament, Wahler’s book makes for interesting reading, shedding considerable light on how James’s role in early Christianity was nearly erased from time if not for the finding of many ancient texts in 20th century.

Yet the book has some problems. First, the book is dense and sometimes convoluted. Wahler’s enthusiasm for his material is apparent, but he introduces too many ideas without the proper set up, especially in early chapters. Second, the book is in need of line editing and sculpting. For example, the last paragraph on page 207 continues without a break until the end of page 210. (Without a pause to collect their thoughts, readers are likely to feel rather lost at sea.)

The Bible Says ‘Saviors’ shows promise, and Wahler’s ideas are provocative, but his book needs the eyes of a seasoned editor to help him sculpt these ideas into a powerful challenge to the status quo.