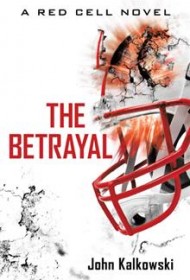 In this action-packed young adult novel, 15-year-old Will Conlan finds his own morality under fire.

Will’s life is full of the normal teenage angst – school, girls, and sports – but he also works for the CIA’s Red Call, a group that brainstorms possible terrorist scenarios. His double life begins to unravel when a terrorist blames Will for a fellow radical’s death. The terrorist wreaks havoc, first by hacking Will’s computer, then by stepping it up to more serious attacks.

Will is able to outmaneuver the terrorist—until his girlfriend Stacey is kidnapped. Then Will is the one who is “played.” Not only does he unwittingly help the terrorist carry out his plan at a football stadium, he loses all credibility with the CIA and must work to clear his name.

Although the opening chapter might be a bit disturbing, any unease is quickly deflected in a neat twist, and despite today’s climate, the book is strictly escapist fare. The terrorist’s attack on Will’s home, for instance, is straight out of the Home Alone playbook as Will uses dental floss as a tripwire on the stairs. The action is fast moving and the book’s last third is clever and exciting.

There are a few moments that are a bit of a stretch. When Will and his friends are attacked, for example, Will arrives home in a police car, bruised from foiling the terrorist. His parents give him brief, loving attention, but his mother soon reminds him he has a paper due. “…Don’t you suppose there’s still a little time tonight to get started on it before bed?”

Nonetheless, the book—the second in the series—is engaging overall, and Will is a likeable hero. It’s a short, easy read and speeds rapidly towards the conclusion, which won’t really be resolved until the sequel. Given its fast-paced plot, the book would be particularly well-suited for teens who like the action of video games brought to the printed page.