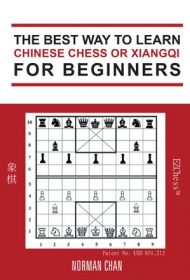 With chess pieces like cannons, chariots and elephants (in addition to pawns, kings, queens bishops, etc.), and the Chu and Han River boundary in the middle of the board, Chinese Chess has enough differences from “universal” chess to warrant this book—a manual that first describes the rules, tactics and strategies beginners need to understand the wizardry that plays out later in the many championship games the author lovingly recounts.

One of the major differences in Xiang-Qi to universal chess is the playing board and location of the chess pieces in relation to the board itself. Universal chess is played on a checkered 8×8 grid with pieces placed inside a square. The Xiang-Qi board consists of 9 lines wide and 10 lines long, with pieces placed on the intersections of the lines. With this book, Chan introduces his “EZChess Board,” his version of the conventional Chinese chess board—with 90 squares and an invented “coordinates” move-recording system he has created to simplify game notation.

He also includes a helpful comparison chart of the differences between universal and Chinese chess and a robust table of contents that clearly lists the contents of each chapter.

Like many, the author believes that greater focus should be placed on middle- and end-game tactics and strategies, rather than opening moves. Thus, the sections on these tactics heavily rely on illustrations, with suggested moves, grandmaster games, and special rules that support his theories.

Students of all ages interested in immersing themselves in Xiang-Qi will find the book an informative and readable introduction to this interesting variation on universal chess.