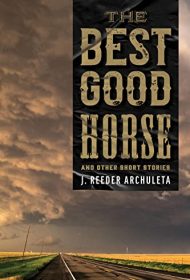 Using primarily a backdrop of Texas and the surrounding Southwest territory, J. Reeder Archuleta offers a collection of 14 short stories that focus on a bevy of tough and engaging individuals dealing with life from various points of the moral spectrum.

In the tradition of the Old West, Archuleta weaves classic nuances throughout several of his stories. From details of a brawling rodeo bull rider in “Golly Gloves,” with his calculated response atop a massive beast with rolling eyes and twisted turns, to the title story where a lone cowboy with failing eyesight befriends and offers advice to a ranch cook’s daughter, Archuleta demonstrates familiarity with his subject matter. Featured characters are cowboys, Native Americans, law enforcement and ne’er-do-wells, prostitutes, bullies, and priests.

The author’s tales present complex characters handling situations on their own terms. For example, “Following the Harvest” illustrates lessons learned by a hard-working high school student who unknowingly befriends a prostitute wanted for murder. “Chapo” focuses on the concerns of an ailing Native American, a man caught between the dictums of his own people and those of the white man’s world.

Themes often reflect the positive and negative aspects of human nature, and endings are consistently thought-provoking. While some characters consider the moral high ground, others contemplate the sins they’ll commit in the future and, perhaps, the consequences of those sins. Along those lines, “The Art of Life” demonstrates how a woman creatively described as “one of those rare beauties, hell-bent on her own destruction” carelessly abandons her young daughters to community locals, leaving these concerned individuals to ponder the misfortune of this mother’s sins; such transgressions can’t merely be washed away by the cleansing rains of Mother Nature.

With a subtle, quiet blend of place, character, and individual storylines, The Best Good Horse and Other Short Stories will most likely appeal to those who enjoy the Western subject matter, as well as compact, thought-provoking, character-based tales.