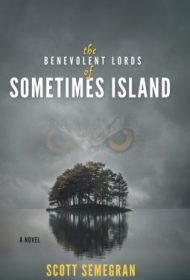 Scott Semegran’s captivating novel, The Benevolent Lords of Sometimes Island, poses the question: what would happen if four pre-teen boys got stranded on an island? The author describes his book as a response to William Golding’s Lord of the Flies (which was Golding’s response to R.M. Ballantyne’s The Coral Island).

The titular “benevolent lords” refers to four best friends: William, Randy, Miguel and Brian. In the summer of 1986, they are soon-to-be eighth graders trying to avoid the Thousand Oaks gang—high school bullies named for their suburban neighborhood.

One day, they are chased by the gang. As the police arrive, they manage to make off with the ringleader’s backpack, which is filled with money and drugs. Later, on a boating excursion, they find themselves again running from the gang and eventually end up stranded on Sometimes Island without food or water. This set-up recalls Lord of the Flies, but whereas Golding’s story ends in chaos and death, here the boys support each other as they face challenges and deal with the consequences of their actions.

Semegran has a delightful voice, which shines through as the adult William tells the story. William’s wry, astute observations are worth the read alone. Of a friend who said his mother probably wouldn’t let him go camping, but shows up with a backpack nonetheless, William notes: “Sometimes he spoke like a pessimist, but his actions usually screamed optimism.”

Far from cookie-cutter, the characters are unique and ethnically diverse (one friend is black, another Latino). Readers will find these true friends who have each other’s backs immensely endearing. As the tension and sense of danger slowly builds, readers become utterly immersed in the author’s world and are left wanting more by book’s end.

This well-crafted story will appeal to anyone who grew up in the ’80s. Fans of Stand by Me will also enjoy this trip back in time. Although at times wistful, it’s not a purely nostalgic ode to growing up, but a genuine, moving and irresistible meditation on the value of friendship.