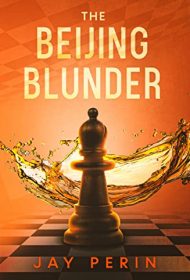 The Beijing Blunder, the fourth book of Jay Perin’s One Hundred Years of War series (based on the Sanskrit epic The Mahabharata), continues the saga of three dynasties seeking control of the oil market.

In the series’ first three installments, the Barronses, Kingsleys and Sheppards arranged a marriage of convenience between Lilah Barrons and Brad Kingsley, despite Lilah’s feelings for Harry Sheppard, her first love. The marriage promoted Lilah to a leadership post in their newly formed conglomerate. Lilah fell afoul, however, of Kingsley patriarch Godwin.

This installment opens in 1988, with Lilah, Brad and Brad’s brothers on the run after being tried for treason during a military show-trial engineered by Godwin. Their flight takes them around the world, including adventures in Colombia and Macau, as they plot to return home and bring their enemies to justice.

Meanwhile, Godwin schemes to get the runaways under control, and Harry scrambles to protect Lilah. His efforts take him to the door of Lupe Valdez, a strip club owner with ties to the Kingsleys. A minor character earlier in the series, this savvy entrepreneur comes into her own in this volume.

Indeed, character development overall remains a hallmark of the series. Perin’s characters are irresistibly smart, determined and larger than life. Lilah’s fearless sense of principle and Godwin’s unrelenting deviousness are particularly well-matched. The plot is inherently propulsive, with Perin’s use of multiple international locales adding to the intrigue.

As in other installments, however, the novel stumbles in its pacing. Long, dialogue-heavy scenes in which Godwin unveils various plots threaten to bog down readers. On the flip side, a sequence in which the fugitives take advantage of Macau gangsters is confusing and could use more explanation.

Fine-tuning the pacing would improve readability. Still, The Beijing Blunder should please fans of Perin’s earlier books, leaving them eager for future installments of the projected seven-book series. (Note: It’s best for newcomers to start at the beginning.)