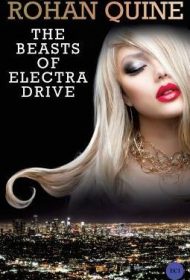 A prequel to Rohan Quine’s previous releases (The Imagination Thief, The Platinum Raven, et. al.), this novel is essentially near-future cyberpunk subtly blended with elements of LA noir and dystopic fiction to create a darkly stylish and, at times, visionary glimpse into humankind’s future.

Jaymi Peek is a wildly successful game designer and developer who lives in a sprawling Hollywood Hills mansion. He was formerly part of a design team for a Los Angeles-based games development company working on a platform for an online game that has the potential to irrevocably change society, and not in a good way. He quit after becoming disgruntled with the culture of the company, whose mission was to “produce lazy, trite concepts dressed in the gloss of high production values, designed to appeal to the most unreflective, cud-chewing and troglodytic instincts of game-play.”

When the company’s brain trust comes after Jaymi, he fights back by creating six virtual Beasts who inexplicably break free of their cyber confines into the “mythic meat-space of Los Angeles” and embark on a mission of revenge. Richly described, the beasts are androgynous characters with full backstories, personalities, and idiosyncrasies. Unleashed upon the world, they allow Jaymi to achieve vengeance in ingenious ways.

This is an intriguing premise, but the story’s true power comes from its underlying theme: Humans can choose to live in the superficial, and underlying falseness, of tabloid reality (as gamers do when engaging in the novel’s online game), or embrace the “complexity, unconventionality, beauty and subtlety of truth” of the world around them. Ultimately Jaymi’s journey of self-discovery mirrors our own: We all seek happiness in the short time that we inhabit the “meat space” of this world.

The novel suffers from a repetitive narrative structure, as the author essentially uses the same framework to tell the Beasts’ individual storylines, even sometimes employing the same sentences (with differing subjects). Also, the conclusion is a bit predictable.