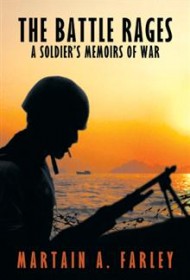 At age 17, military school graduate Martain Farley is so gung-ho to “serve and protect” that he and his twin brother join the Army during the Vietnam War. Yet in The Battle Rages, he details an experience that scarred his soul for decades afterward.

Farley’s balanced, clear-eyed memoir begins with the indignities of induction (“bend and spread ’em wide”). But that same process also introduces him to the charms of military life, such as the startling fact that no MPs haul away the underaged and very nervous Farley when he accepts the cocktail offered by an insistent flight attendant on his way to basic training.

Readers more accustomed to books focused on harrowing depictions of conflict will likely appreciate Farley’s behind-the-scenes look at day-to-day military life in a war zone. Farley tells of wary friendships with Vietnamese workers who could at any moment prove to be Viet Cong; his fascination with the beauty of the countryside, and the customs of its people; the frequently inane requirements of the military but also the unique and compelling bonds forged among its members.

Despite its title, there aren’t many battles of the shoot-’em-up kind in Farley’s memoir. Instead, he spends long nights on guard duty, the tedium undercut by the tension of knowing that a mortar could land within the perimeter at any moment. Farley’s battle is the one within. Whenever he returns home, he finds himself unable to shed the edginess that is key to survival in Vietnam, but causes inexplicable and dangerous outbursts of rage in safer places. He ends up re-upping for Vietnam twice, largely because of that inability to readjust.

Farley says he wrote the book so that people will understand the ongoing costs of war. His is a story that will resonate among today’s veterans of the Iraq and Afghanistan wars.