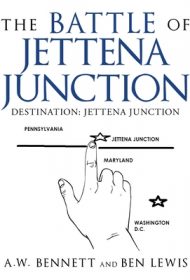 In this lengthy offering, A.W. Bennett records and re-imagines the American Civil War. Instead of writing a novel “with a dash of history,” he puts history first, using “plot as the backdrop,” according to the back cover.

The core story involves events in the Civil War’s waning days. Northern forces seem headed for victory after routing the rebels at Vicksburg and Gettysburg. Meanwhile, John Wilkes Booth plots to eliminate President Lincoln, and a group of Southern secret agents, including “Wild Bill” Hickok, also examine the possibilities of kidnapping and assassinating Lincoln to create chaos for the North. They select a Pennsylvania train junction, Jettena, as a strategic spot to accomplish the deed.

Aside from the Civil War, the story focuses much attention on the American Revolutionary War; incidents leading to the civil conflict; and even the treatment of Australian Aborigines compared to U.S. slaves. Well-researched historical detail includes: the little-known enlistment of soldiers for both sides in Canada; food riots in the beleaguered city of Richmond; and harsh conditions in the Confederate-run Libby Prison in that same city.

Bennett clearly enjoys adding fictional characters into the mix, and his blend of truth and fantasy is smooth enough to make even well-informed readers wonder what’s fact and what isn’t.

Problems, however, hamper the story. Copyediting mistakes abound, including incomplete sentences; passages with beginning quotation marks but no end quotes; mistakes such as two mentions of Wild Bill Hickok on the same page, one as James Butler Hickok (correct), another as William Butler Hickok (incorrect).

The narrative also bogs down with extraneous information, such as the Aborigines section, and long, textbook-style passages about historical and imagined events.

Finally, the story ends before the Jettena Junction incident. While this allows for a sequel, many will be upset to discover there’s no resolution after such a long story.

In sum, history buffs might enjoy parts of this hefty work, but most will find it an overlong and challenging read.