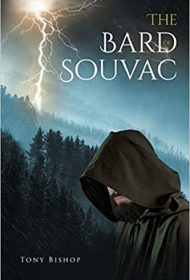 Immortality is hardly a gift in Tony Bishop’s fantasy novel, The Bard of Souvac.

As the story begins, readers learn that the titular character has been wandering the earth for more than 100 years, spinning the same tale: One-hundred years before, three knights who supported the reign of a deposed wicked ruler were cursed by the malevolent Evil One to eternally watch over the ruler’s remains in the King’s Forest. The Bard, too, has been cursed with immortality, an onus earned by mere bad luck and which will remain until he finds three volunteers to willingly enter the forest and accept the knights’ curse in their stead.

With that backstory for context, the Bard easily finds traveling companions, claiming he’ll bring them to the woods to “destroy [the knights] once and for all … while keeping those free that would otherwise take their place.” He’s joined by swordsman Koyne Dale, barmaid Avalon, warrior Jace, and a man with his own score to settle with the knights, Graham.

However, readers learn that the Bard’s vow to his companions might not be entirely truthful, as he’s desperate to lift the curse of immortality and find release in death. Questions of loyalty, deceit and morality unfold as the group heads toward a showdown with the knights and Lord Kish—the aforementioned Evil One—who wields the powers of a demon and controls supernatural minions in the mortal realm.”

Bishop introduces his world and its intricate conflict in the novel’s first 30 pages, employing hefty exposition that can be difficult to navigate. The dialogue and detailed backstory sometimes feels clunky and overwrought.

Still, the author delivers plenty of action, character development and surprises, and the Bard’s inner struggle with his overwhelming desire to shed the curse steadily builds and deepens throughout the book.

Overall, Bishop’s original twist to timeless tropes is both innovative and clever, combining fantasy elements in a fresh way that readers are sure to appreciate.