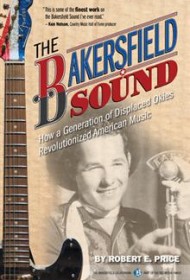 Few music books capture the cultural and historical context along with the sound of the music itself as well as The Bakersfield Sound. Journalist Robert E. Price’s prose deftly sucks readers in to the rich stories of the personalities that populated the dustbowl town of Bakersfield, California, a stop north of Los Angeles that developed a twangier, rockier, stylistic counterweight to Nashville’s sweet, string-laden pop country music in the 1950s, ‘60s and ‘70s.

But the book isn’t just a rundown of the lives of country music hit-makers such as Buck Owens and Merle Haggard. It’s a history of America from the early 1900s to today, highlighting the crossroads of commerce and culture that sparked the alternative country music scene that made Bakersfield unique.

Price begins his book with a sociological telling of the Depression-era Dustbowl migration of Okies to the West Coast, explaining that in addition to migrant farmers from Oklahoma, newcomers from Texas, Louisiana and throughout Middle America to the Southwest also arrived. Then the author builds up to the Bakersfield Sound with a history lesson of musical influences, including Western swing, UK folk ballads filtered through Appalachia, Mexican music and more. He introduces readers to honkytonk dancing (and fighting) culture, and takes us on a tour of the legendary nightclubs, dance floors, radio and TV stations that attracted the non-Nashville talent that made up the vibrant Bakersfield scene.

Price’s writing, though incredibly detailed and painstakingly researched, never bogs down in academic dullness; you can tell he’s a passionate fan. And he pays tribute not just to the obvious stars, but to those who helped the scene come together before, during and beyond Owens and Haggard — musicians such as Dwight Yoakam, the Mavericks and Brad Paisley. He even adds appendices listing “Founders,” lesser-known lights and a walking tour of addresses in Bakersfield worth visiting.

If you weren’t already a fan, Price’s encyclopedic scope will have you seeking out the music of Buck Owens and the Buckaroos, Merle Haggard and the Strangers, and other Bakersfield stars. Put them on while you enjoy the book, and you’ll be transported to a time of pure American music.