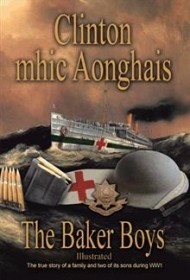 The Baker Boys tells the story of two brothers, Victor and Malcolm Baker, both embroiled in World War I. One serves as a medic in the Middle East while the other faces combat in France.

Author Clinton mhic Aonghais takes much of his material from a daily diary Victor kept while in the service. The humanizing glimpses we get of the brothers show heart and humor.  Victor emigrated to Australia as a teenager, where as a milkman he developed the habit of topping off the milk cans with creek water until a customer found a leaf in her milk and complained. He ultimately moved to New Zealand, where work in a hospital led to his service as a medic in the war. Malcolm would have been conscripted but enlisted on his own, training in trench warfare, the use of poison gas, and other tactics.

Unfortunately, the brothers’ stories take a backseat to details of the war that disrupt the narrative flow. Victor’s medical service is interesting, for example, but the history of each place he visits proves distracting. Malcolm appears briefly, but then drops from view while we read about general battlefield strategy, the use of poison gas and gas masks, and other information. He then resurfaces, only to make the ultimate sacrifice in the Battle of Somme. Typos and muddled sentences further slow things down.

It’s unclear where Victor’s diary ends and other material takes over. At nearly 900 pages, the book is packed with photographs, but none are credited, and there are no footnotes or bibliography. A few newspaper articles are cited in the text, but this still leaves a lot unaccounted for.

Either a leaner story with more focus on the brothers or a history of the war with thorough source documentation could be an engaging read; The Baker Boys exists somewhere between the two. War buffs will like the battlefield action, but the family story sinks beneath its weight.