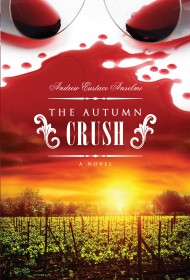 The “Autumn Crush” of the title refers to an Italian-American family’s tradition of making wine every fall. The practice is rooted in the childhood of Dante Di Benedetto, who leaves a tiny Italian farm town in the early 20th century with his best friend for a new life in America. This novel spans the lives of three generations of Bennetts (the Anglicized name Dante assumes in the U.S.) and explores the tragedy that eventually befalls the family.

It’s clear that Andrew Anselmi knows American history and Italian and corporate culture as he covers the machinations of the publicly held construction company Dante builds and his son Guy takes over. Family values play an important role, with the annual grape-crushing just one hub of connections between family members.

This sprawling family epic is a somewhat-typical immigrants’ tale of achieving the American Dream, bookended by a murder and subsequent trial when Guy Bennett is charged with the double murders of his business partner — the son of Dante’s childhood friend — and his wife. Although it opens with Guy in jail, the novel feels like two books, since it immediately flashes back to the family saga; the courtroom drama doesn’t begin until more than halfway through.

Anselmi is a solid writer, but he often includes too much detail. In one description of a family dinner, he can’t resist listing every dish, even though the food has no bearing on the story. The novel’s most interesting aspect turns out not to be the immigrant tale or murder mystery (which gets wrapped up hastily after a long, slow buildup) but Anselmi’s ongoing commentary on racism. The Italians are keenly aware of being considered “guinea-wops,” but they have similar slurs and stereotypes for others.

Such thinking may make readers cringe, but it’s a realistic reflection of multicultural America. Readers interested in this aspect of America’s past and who can overlook the narrative’s superfluous detail should become easily immersed in Anselmi’s storytelling.