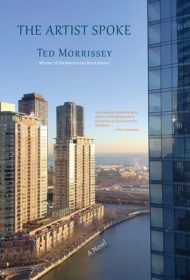 An award-winning author explores the ways literature shapes its devotees’ lives in this gently bizarre story of a writer confronting his failed hopes, tenuous dreams, and literary legacy.

Poet and professor Christopher Krafft lost his romantic partner over his involvement with Logos, a literary project engineered by eccentric author Elizabeth Winters that requires participants to absorb her words into their bodies. When Winters dies as her faithful are assembling for their instructions, Krafft spends a hallucinatory weekend in Chicago connecting with fellow Logos participants, including an attractive librarian named Beth, while he navigates a snowstorm, contemplates his failed love affair, and dwells on the power of words, his and others’. As surprises unfold around the dead author and her final narrative, Krafft feels a renewed vitality for and commitment to his own work.

The book is a literary love letter to the patrons Krafft observes in a bookstore: “a dying subspecies: readers, lovers of books, lovers of literature.” The manifold allusions to great classics and literary theory, from Beowulf to Finnegan’s Wake, Foucault to Derrida, along with meta moments in which Krafft describes inventive scenes from Winters’ novel Orion, are a bold wink to fellow literati.

Morrissey’s supple sentences are a mini-tutorial on craft, pulling a world of emotion from the smallest image. As Krafft watches Beth’s face in the back of a car, “a bar of white-blue light ran across her face, from brow to chin, like she was being scanned by some medical device, creating an image that would exist forever somewhere.”

Although Krafft bemoans the tiny readership for his poetry, the book takes a hopeful stance on literature’s ability to form human connections, as when Krafft perceives an emergency room as “a living organism” of personal narratives “tangled and mutated…to make the tale of his being here, now.”

Those who revel in how closely observed detail and powerful language can infuse the most mundane human experiences with beauty and tenderness will relish this novel.