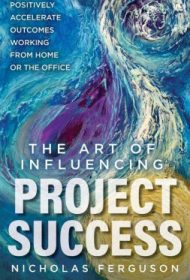 In a succinct, intriguing combination of the science of time and motion and the mind-body-spirit concept of co-creation, a technical advisor to financial companies teaches project managers how to lessen resistance and enhance flow to lead teams to bring projects to satisfactory completion.

After suffering burnout from single parenting and managing teams across three countries for a computer corporation, Nicholas Ferguson took time off to meditate, study the inspirational message of Abraham-Hicks (a world-renowned speaker on the Law of Attraction), and develop his own theories of project management. By studying Isaac Newton’s three laws of motion and Albert Einstein’s theory of relativity, he came to understand that project efficiency “isn’t nearly as much about the force you apply to make things happen as it is about the energy you flow to allow it to happen.”

In the chapter “Movement, Force, Momentum, and Project Resistance,” he helps readers grasp Newton’s physical laws of motion and Einstein’s theories of kinetic energy, potential energy, and mass-energy equivalency. In chapters such as “Reflecting the Success You Want Forward” and “Tools and Techniques for Consistent Improvement,” he acknowledges the challenges of teamwork, tight schedules, and the inevitable roadblocks in any project while he explains that perception is the secret to raising the vibration to lessen drag and open channels: “…focus on that which feels better and as you do and believe it more and more, what you are seeing in the world will change. Believing is seeing.”

Ferguson speaks the languages of Newton, Einstein and Abraham-Hicks fluently. He explains physics theories so any layperson can understand them, melding them with New Age ideas of co-creation, empowerment, abundance, perception, and vibration in a way that won’t turn off people allergic to concepts they can’t quantify on a spreadsheet. His book also addresses the coronavirus work-from-home reality.

Ferguson is laser-focused on successful project management, cognizant that readers need clear, concise explanations, actionable advice, and support, which he provides without wasting a word.