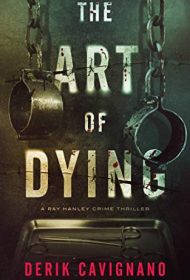 A hard-nosed cop and a serial killer are at the heart of this tense police procedural by author Derik Cavignano.

In a taut novel that falls thematically somewhere between Martin Scorsese’s movie The Departed and William Thomas Harris III’s The Silence of the Lambs, Cavignano combines the brutal saga of Boston’s mob warfare with a weirdly particular serial killer running amok in Beantown.

A while back, the mayor of Boston negotiated a long-standing truce between the city’s two armies, led by Jack Flaherty and Sal Giabatti. But that comes to an end when mobster “Danny the Mule” is dumped at a local quarry with his member excised and sewn to where his nose used to be. Yes, it’s ugly, and it gets worse.

There’s mob drama going on here, but the central figure is a super-creepy butcher with no apparent mob ties who’s known here as “The Artist.” The good guy is family man Ray Hanley, a 32-year-old cop with a history with the Boston mobs. Ray gets wrapped up in this new case after the aforementioned wise guy is found. From there, the story oscillates between Ray and his partner Billy’s investigation and The Artist’s ugly and graphic mutilations of his still-alive victims, among them an art critic and other victims who point towards the killer being well connected to the city’s leadership.

If you can stomach the graphic mutilation here, you’ll find a solid crime thriller, in the vein of its predecessors. Cavignano artfully misdirects the plot with family dramas and subtle clues, while keeping the cat-and-mouse conflict between Hanley and his quarry on track—all while the terror of the story’s victims ratchets up the tension between chapters.

Even better, the story offers a preview of a promising spin-off sequel, The Righteous and the Wicked, featuring familiar characters that readers of The Art of Dying will have come to appreciate.

Author Platform: Winner of the 2019 American Fiction Awards for Horror