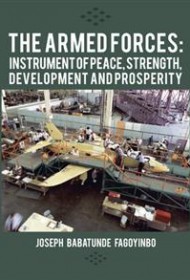 The Armed Forces is a hefty and highly detailed sourcebook for military aficionados. Nigerian engineer Joseph Babatunde Fagoyinbo has collected tremendous amounts of information here that highlight the history, organizational structure, and socio-economic impact of different divisions of fighting forces around the globe, while also presenting data on the politics, manufacturing and agriculture of such regions as the U.S., Europe, and the Middle East, to name a few.

If you’re looking for the names and levels of the South African military or the divisions of the Netherland’s military, for insight into the U.N.’s role in peacekeeping and security, or to find what kind of produce is grown in Southeast and East Asia, chances are you’ll find at least a smattering of information here to get you started.

Fagoyinbo should be congratulated on bringing together so much technical information on the topics at hand. While not a book you would read from cover to cover, it’s a solid reference book of facts and statistics. Numerous charts and photographs are also included.

A few problems exist, however. One is the book’s intent. While the author provides a preface and foreword, it’s not always clear why he’s brought this information together and why he focuses on the places he does. For instance, while there is plenty of information on Pakistan, why so little on Afghanistan? And while Fagoyinbo’s book is mostly well written, his prose can be dense, making it difficult to assess what point he’s trying to make. In addition, though spelling and grammatical errors are few, the book needs the polish that a good copyeditor can provide.

Criticism aside, Fagoyinbo has done a remarkable job bringing together information on the army, navy and air forces of different nations. Though this book will appeal mostly to military personnel and historians interested in international regiments, those interested in war games may also find the information useful.