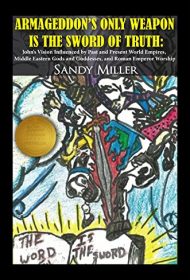 Author Sandy Miller has been teaching the Bible as literature and cultural history for the past 17 years. Her book, Armageddon’s Only Weapon is the Sword of Truth, is a compilation of lectures currently offered at University of West Florida’s lifelong learning center.

In these 15 lectures, Miller presents the “literary” interpretation of the biblical book of Revelation, contrasting it with the “futuristic” point of view, which posits that the events described in Revelation are prophetic and will unfold in the future as foretold. The literary perspective, she feels, offers people an “uplifting view rather than a treatise of gloom and doom.”

The lectures follow the order of Revelation’s chapters, while adding extensive cultural and historical context to John’s visions, discussing, among other topics, influences from the Babylonian, Greek and Roman empires; Roman emperor worship focusing on Nero; heathen temple practices, and the structure of Hebrew society during and prior to Christ’s time.

The author concludes that rather than a literal war, the Battle of Armageddon is figurative — “a war fought daily by Christ and his army of truth bearers sharing the goodness of God with people everywhere.” She offers the following apologetic for this interpretation: “When I decided to teach Revelation, I had to understand Armageddon. I realized Christ’ s weapon was the sword of truth carried in his mouth…. Seeing Christ’s army dressed in spotless, fine white linen, I understood Christ’s army doesn’t have bloody victims.”

The book is professionally written, researched, and presented logically from a Christian worldview. Each lecture includes helpful discussion questions.

Many Christians will object to Miller’s non-literal interpretation of the events described in Revelation. However, the author’s deep dive into the cultural influences of the period has much merit, and she presents a strong case for the goodness of God toward humanity, the power of love over evil, and the possible fulfillment of some of the imagery in John’s visions of the late first century A.D.