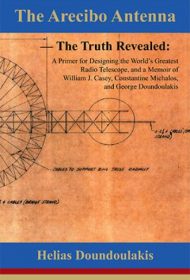 The average physics enthusiast may know about the Arecibo antenna, a cutting-edge radio telescope. However, in The Arecibo Antenna, Helias Doundoulakis posits that most people probably are woefully unaware of the antenna’s history and that his own brother George was its main design contributor.

The Arecibo antenna was designed to analyze distant electromagnetic waves. It was used to study radio astronomy, atmospheric science, and was even instrumental in the search for extraterrestrial life. It was also applied in a 16-year study to prove that the first-discovered binary pulsar (a system within the Milky Way made of two objects going around each other in elliptical orbit) was losing energy through gravitational radiation. Intended to dispute Einstein’s general theory of relativity, it instead proved the opposite.

Doundoulakis carefully recounts the powerful antenna’s path from its germ of an idea in the mid-20th century to its construction in a remote jungle just outside Arecibo, Puerto Rico. Along the way, he provides a detailed biography of his brother George, his “hero, confidante, and trusted friend.” The author fervently believes George has never received proper accolades for his pivotal role in the general planning of the antenna and that without George, the groundbreaking suspension system that made the antenna possible wouldn’t have been conceived.

The author provides a thorough chronicle, delivering notes, copies of reports and schematics, articles and other fruits of diligent research. He humanizes the account with tales of his family background and provides information about other significant players, including William Casey (better remembered as CIA director in the 1980s), and WWII resistance fighter Patrick Leigh Fermor.

History books are often dry and pedantic, but Doundoulakis’s delivers an engaging writing style that will please physics enthusiasts and non-scientific readers alike. In a nod to pop culture, he even notes that the Arecibo antenna is featured in the James Bond movie Goldeneye.

In sum, this is a well-constructed, accessible read, and a worthy addition to the Arecibo antenna’s legacy.